Stacy M. Kirven has been helping immigrants in the United States and abroad since 2012, when she joined the International Human Rights Practicum at the University of Wyoming College of Law. During law school, Stacy worked on ground-breaking litigation for maternal health in Uganda and she lived in Tanzania, Africa, volunteering with a Women’s Rights NGO.

Since graduating, Stacy has been the primary immigration attorney in Sheridan and Johnson counties, helping clients obtain green cards, student/work visas, defend against deportation, and in obtaining their US citizenship. 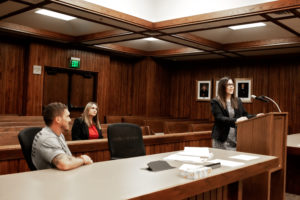 The term “Green Card” refers to a document given to people who immigrate to the United States who have become lawful permanent residents. In essence, they have been granted the right to live and work in the United States legally.  There are a few ways to secure a Green Card. An individual may be sponsored by a family member or their employer. Those granted asylum status may be eligible to adjust their immigration status to that of a lawful permanent resident. The in-person interview is a large part of being granted permanent resident status. Having a seasoned Immigration Lawyer review your case and help to prepare you for the interview will allow you to answer all of the interviewer’s questions in a clear and concise manner and greatly increase your chances of being granted a green card.

There are many types of Nonimmigrant Visas that allow foreigners that have no immigration intent to enter the United States for a set period of time. Some of the most common are:

Each Visa has its own criteria and application process. It can be helpful to speak to an immigration attorney in order to determine which visa is most suited to your needs and for which you have the best chance of qualifying. An immigration attorney can help you to prepare your application paperwork to make sure that nothing is missed. Many times, applications are denied just for clerical errors, not on the substance of the application. Contact our office if you or someone you know is seeking a visa and we can begin the process of evaluating your options and put you in the best possible place to have your application granted.

One of the most common ways in which the US Government removes people from the country is by a violation of immigration law. This may not simply be an undocumented entry. Working a job without the proper visa, or failing to notify Citizenship & Immigration Services of an address change can qualify you for deportation. Numerous other criminal offenses can carry with them the threat of deportation. If you have been convicted of a felony or even misdemeanors that are a “crime involving moral turpitude” (CIMT), you may be at risk for deportation. CIMTs are crimes that “gravely violate the sentiment or accepted standard of the community.” A skilled immigration attorney can argue the merits of the “violation” which can greatly affect the outcome of the process. Seeking a Waiver of Inadmissibility may allow you to remain in the United States for your family’s sake even though, under the strict reading of the law, you meet the criteria for removal. No matter the circumstances, facing deportation can be a frightening prospect for any permanent resident or immigrant living in the United States. Many have risked life and limb to get to the United States and all of their efforts to make a better life for themselves and their family can be undone with a deportation proceeding. These processes may also break-up families by removing a loved one from the country. If you or a loved one is facing a deportation action, do not delay. Contact a Wyoming immigration attorney today about your case.

Many people that have achieved Lawful Permanent Resident status want to know more about becoming a United States Citizen. It is imperative to speak with an experienced Immigration Attorney to go over the entire citizenship process. It is important to consider the benefits and obligations of US Citizenship, here are some things to consider:

The Citizenship and Immigration Services take the language and civics tests very seriously. You must be prepared to pass these tests. An immigration attorney can help guide you to resources to make sure that you are prepared for the tests as well as ensure that your application paperwork and interview responses put you in the best possible position to be granted citizenship.

Our dedicated team at Kirven Law LLC is ready to fight for you.